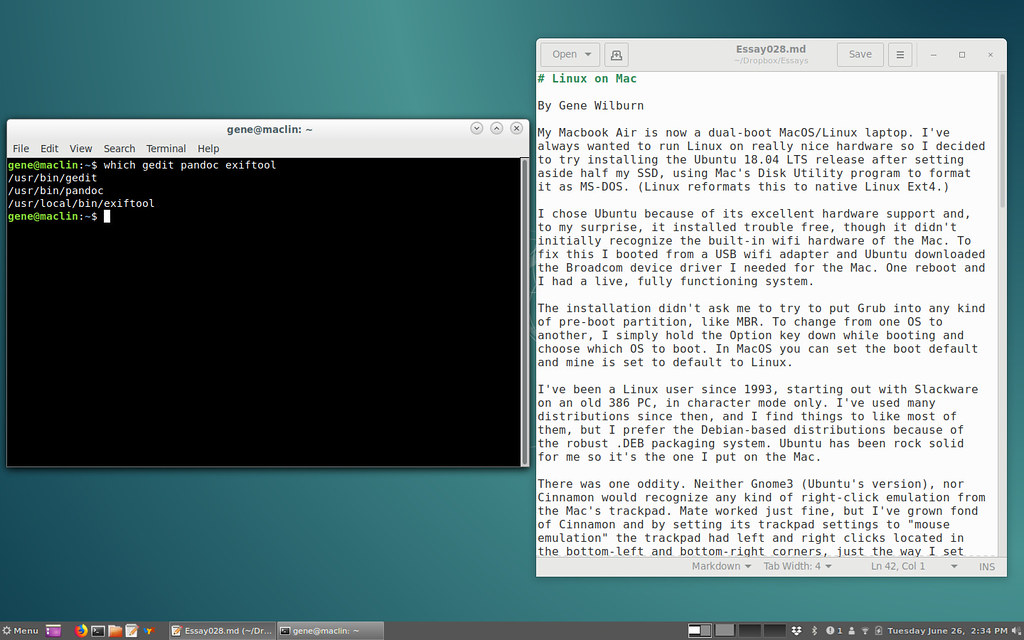 My Macbook Air is now a dual-boot MacOS/Linux laptop. I’ve always wanted to run Linux on really nice hardware so I decided to try installing the Ubuntu 18.04 LTS release after setting aside half my SSD, using Mac’s Disk Utility program to format it as MS-DOS. (Linux reformats this to native Linux Ext4.)

I chose Ubuntu because of its excellent hardware support and, to my surprise, it installed trouble free, though it didn’t initially recognize the built-in wifi hardware of the Mac. To fix this I booted with a USB wifi adapter inserted and Ubuntu downloaded the Broadcom device driver I needed for the Mac. One reboot and I had a live, fully functioning system.

The installation didn’t ask me to try to put Grub into any kind of pre-boot partition, like MBR. To change from one OS to another, I simply hold the Option key down while booting and choose which OS to boot. In MacOS you can set the boot default and mine is set to default to Linux.

I’ve been a Linux user since 1993, starting out with Slackware on an old 386 PC, in character mode only. I’ve used many distributions since then, and I find things to like most of them, but I prefer the Debian-based distributions because of the robust .DEB packaging system. Ubuntu has been rock solid for me so it’s the one I put on the Mac.

There was one oddity. Neither Gnome3 (Ubuntu’s version), nor Cinnamon would recognize any kind of right-click emulation from the Mac’s trackpad. Mate worked just fine, but I’ve grown fond of Cinnamon and by setting its trackpad settings to “mouse emulation” the trackpad had left and right clicks located in the bottom-left and bottom-right corners, just the way I set them up in MacOS. The Mac trackpad worked almost as smoothly as it does under MacOS. I’ve never had much luck with Windows hardware trackpads and Linux so this was a nice surprise.

The greatest moment of acceptance came for me when I synchronized my Linux Dropbox client and it downloaded my photo files. I opened some of them with Gimp, which I already knew how to use, and Gimp looked really good on the Mac’s Retina display. This was a key finding. As a photographer who has used Photoshop for years, I found myself falling behind Adobe because I was sticking with my Photoshop CS6 package. Adobe’s ACR raw editor no longer supports the cameras I use and I’m just not even remotely tempted to buy in to Adobe’s rent-Photoshop-every-month-for-the-rest-of-your-life option. Photoshop is excellent, but so is Gimp, which costs nothing and stays up to date.

The main part of the Adobe package I’ll miss is Adobe Bridge because it could easily review and batch rename files with my custom naming convention. But last year I solved that too, by writing a Bash script to use Exiftool to extract the shot date and turn the result into my file naming convention.

So, hello Linux on Mac has meant goodbye Adobe. And anyway, I can do fine tuning of photos in Snapseed on my iPad.

The final adjustment I needed was a way to easily enter occasional French accented characters from the keyboard. When you live in Canada, it’s common to want to write something like Trois Rivières in accented fashion, to respect the French spelling. MacOS handles this brilliantly but I couldn’t find any Linux keystrokes that worked like a language Compose key.

I found an app called “Characters” that is simply a character map for different languages. It was awkward to use so I did some Googling and discovered that there’s a deeply-buried option in the keyboard settings that allows you to assign a Compose key. I took the default Right-Alt key, better known as Right-Option on the Mac.

It works just as expected. If you hold down Compose and type a backtick(` ) then a vowel, you get à, è, ì, ò, ù. Same for the other accents. Perfect for when the need is occasional. If I were typing a lot of French I’d switch over to a French keyboard layout, but my use is casual.

As mentioned, I use Dropbox to coordinate my files between Linux, MacOS, and iOS machines. It’s also my most immediate backup.

The rest is pretty standard. I use Firefox as my browser, just as I do under MacOS, and I use the browser version of Gmail so I don’t have to fiddle with email client programs. Besides, I’ve never liked Thunderbird.

For writing, the activity I do the most, I use Gedit, a basic text editor that comes with most Linux distros. It has useful plugins, like one for Markdown support. All my writing files are in plain text, marked up with bits of Markdown when I need italics, bold, or some minor formatting like indented passages. I use Pandoc to convert my Markdown files into HTML files when needed.

I tried using Emacs to write with, but as much as I admire it, I don’t care for it as a writing tool. Besides, its line oriented text files don’t mesh well with my Mac editors, which are paragraph oriented. Gedit works perfectly for my needs, including inline spell checking.

Occasionally I do some programming and lately I’ve been studying a little C++. I could do this on MacOS too, but open-source languages feel more at home in Linux, more complete and up to date. Apple keeps its own development tools up to date, but lags behind on open-source releases like the gcc compiler, Perl, Python, and the rest.

I originally thought I’d pop into MacOS more often — don’t get me wrong, MacOS is an elegant and very modern operating system (far superior to Windows in my opinion) — but now that I’ve eliminated Adobe from my life, there’s not much that’s available for the Mac that I don’t already have an equivalent for in Linux. As a result, the only time I find myself booting into MacOS is when I want to update it, to keep it current.

Linux on Mac is one of the nicest surprises I’ve had this year. While nothing is perfect, this is as close to perfection as I’ve yet experienced.

Linux on Mac — an elegant way to run Linux for the technically inclined.