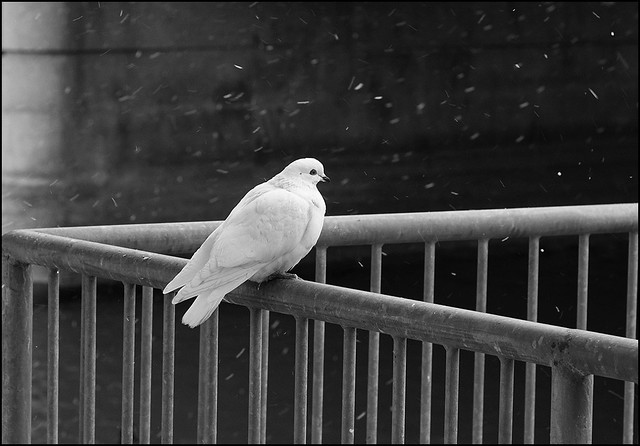 Plugins for Black and White

After exploring the techniques introduced in this series, you may think, yeah, they’re effective, but it’s a lot of work to get to a finished image. Aren’t there any shortcuts?

The happy answer is yes. Shortcuts can be found in the form of Photoshop actions and plugins, Gimp plugins, and in one of the most powerful black-and-white filters, Silver Efex Pro, by Nik Software, part of the Google Nik Collection. First let’s look at actions and plugins.

Adobe Photoshop has the ability to record and script techniques, saving them as Photoshop Actions. Several of these user-created actions are available for free on the internet, and some are offered commercially. Many Photoshop Actions will run in Photoshop Elements, though they can only be created in full Photoshop. There are also plugins available for Gimp, written in languages called Script-FU and Python-FU. Many of these actions and plugins are created to assist the colour photographer, but some can be adapted to B&W. You have to sift through them and try them out to see which ones are for you.

For convenience if you’re studying a Photoshop tutorial while trying to apply it to Gimp, a useful alternative for Gimp users is Gimpshop, a variant of Gimp that renames some of the menu items to correspond more closely with Photoshop.

For users of Photoshop, Photoshop Elements, and LightRoom, there is one “plugin” or filter program that is so good it’s in a class of its own. Let’s take a look at Silver Efex Pro. We’ll start in Photoshop with the image of a spider I shot in a window: 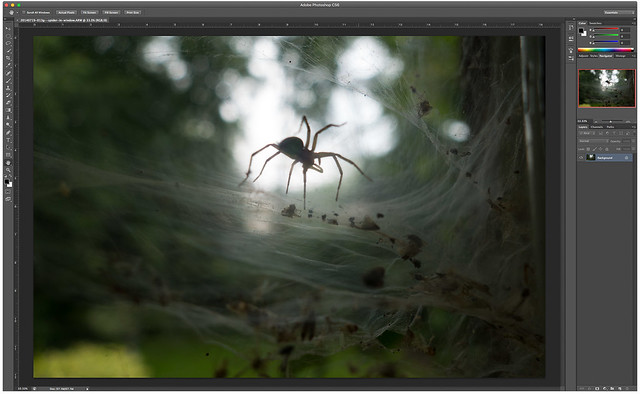 The colour in this shot adds very little to the image, plus there’s something in the brain that finds B&W creepier so I’ll invoke Silver Efex Pro from the menu with Filter > Nik Collection > Silver Efex Pro 2 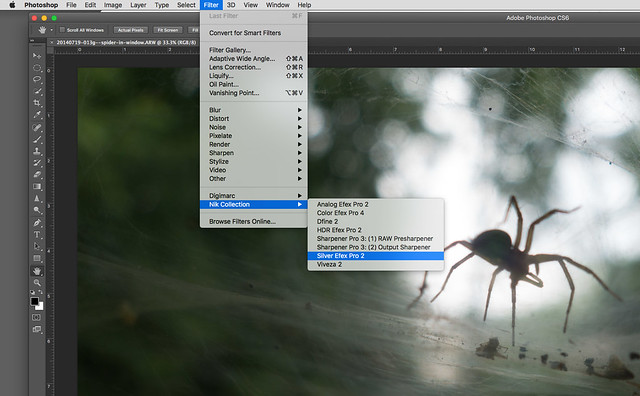 What we see next is surprising the first time you invoke it because Silver Efex Pro transfers your image into a completely separate program that runs from within Photoshop: 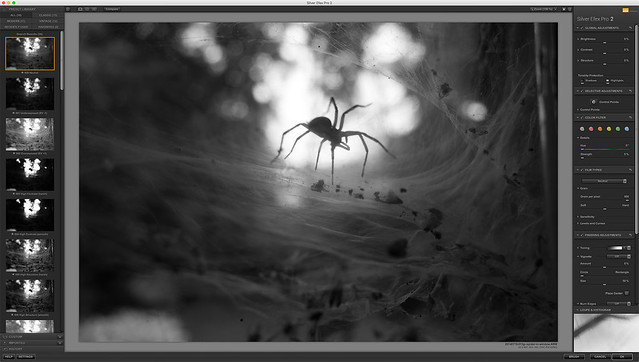 This is a B&W photographer’s dream digital darkroom. In the centre is the image displayed initially as “Neutral.” On the left are over 30 presets, such as “High Contrast,” “High Structure,” “High Key,” “Low Key,” “Silhouette,” and one of my favourites, “Film Noir 1.” Every time you select a preset, the image changes to show you the effect, such as when I select “Dark Sepia.” 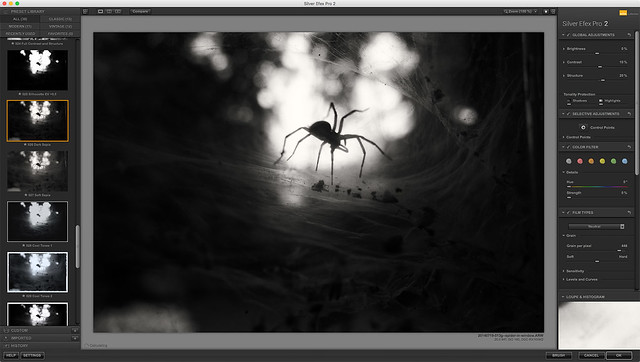 The right-hand side of Silver Efex Pro is where the controls are located and they’re extensive. In broad terms there are “Global Adjustments” such as Brightness, Contrast, and Structure, “Selective Adjustments” which features Nik’s splendid Control Points, “Color Filter” for channel mixing, “Film Types” which try to emulate classic B&W films such as Ilford Pan-F, Kodak Tri-X, and Ilford Delta 3200 Pro. You can add grain and control both the amount and the hardness or softness of the grain. Under “Finishing Adjustments” Silver Efex Pro offers different hues for toning and a superb vignetting tool. Using the tools you can create your own presets and save them as well.

When you click OK, Silver Efex Pro then performs its transformation and deposits it in Photoshop on a layer. Because of this you can either flatten the image or introduce some selective colour before flattening.

It’s hard to fully describe how much faster it is to create a B&W in Silver Efex Pro in contrast to doing everything manually in Photoshop. And because of the handy presets, it encourages you to view and study your image in several different interpretations before making a final selection.

For my final image I chose Film Noir 1, eliminated the border Silver Efex Pro had added, raised the Structure setting to give the spider sharper edges, and used a Control Point to eliminate the smudgy area of brightness in the lower left-hand corner: 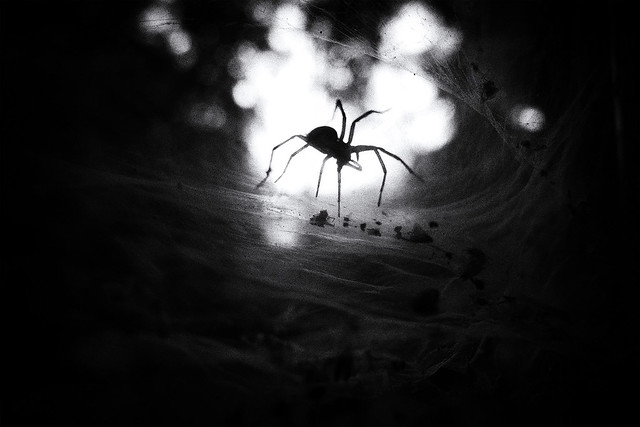 This concludes the series on the craft of digital black and white photography. Thank you for visiting and I hope you’ve found some useful tips. You can contact me at gene@wilburn.ca.