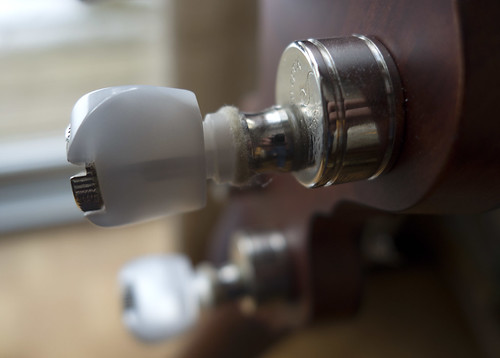 If you’re a folkie or country music musician, you inevitably go through a banjo phase. It may start with a love of bluegrass music, or it may be sparked by listening to the earthy, folksy playing of the late, lamented, Pete Seeger, but it gets into your musical soul and nothing will do but getting a banjo and learning to play. Even Charles Schulz, the creator of Peanuts, once said, via Charlie Brown:

And I conclude my report by offering this suggestion,
As soon as a child is born, he or she should be issued a dog and a banjo,
Ma’am that’s right … a family of eight … eight dogs and eight banjos,
Yes Ma’am, we’re talking happiness here!

The banjo is, overall, the happiest instrument in the band, though it can also evoke sadness and loneliness via mountain minor tunings.

Which brings me to my banjo, an Ome Jubilee. Lovely instrument and I tried to learn it with piddling success. I actually used it on a song that the trio I was in, Olde Spyce, performed at the Forever Young Folk Festival in Oakville. With luck, no music critics were present that day.

I got started on banjo when I went to the Woods Camp of Dance and Music one summer week and signed up for beginner’s banjo with Arnie Naiman, a wonderful old-timey banjo player and instructor. He made it fun, once we students got the hang of the basic clawhammer rhythm. For a guitar player it was like turning the strumming upside down and I noticed that camp staff gave our beginner’s group a wide berth when they walked by. Until the end of the week we sounded pretty dreadful, but the magic started to happen and we all started to get it.

That was then, and this, as they say, is now. I bought the Ome banjo directly from Arnie and worked at it with more enthusiasm than musicianship and it finally dawned on me that I was never going to be a good banjoist. My instrument is, and has always been, the guitar. The banjo got played less and less until it became a forgotten fixture in my closet.

I suspect my story, or a variant of it, has happened to many a budding banjoist. Those who really get the instrument take to it and go on to perform lovely music. The rest of us merely taste what might have been, had we the musical talent.

And so, as I downsize my life into late retirement, I decided to let the banjo go. Not without regret, but with all the weight of reason behind the decision. It’s not as bleak a parting as it may sound, however, because the cash I get from selling the banjo is going toward a new guitar.

And so I say, adieu friend. May you find a home with a talented musician who, along with a dog, will bring you the happiness you deserve. 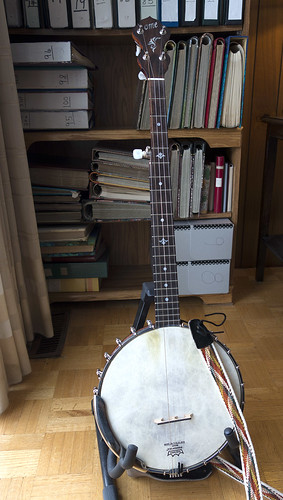