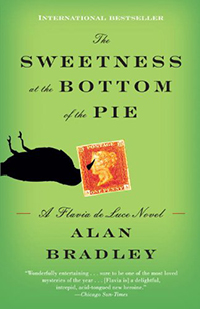 If you don’t know Flavia, and you like mystery fiction, you’re in for a treat. Her full name is Flavia de Luce and she’s an 11-year-old prodigy with a deep love of chemistry. Her specialty, she admits, are the poisons she dreams of concocting to get sweet revenge on those who cross her, like her sisters, or adults who treat her like a kid. In addition, she has a knack or propensity for finding bodies that have died in mysterious circumstances.

The first time we encounter Flavia is in Alan Bradley‘s novel, The Sweetness at the Bottom of the Pie, where she has been hogtied and thrust into a locked closet by her older sisters Feeley (Ophelia), 17, and Daffy (Daphne), 13. Flavia, being very resourceful, works out of her bonds and uses a coat hanger to pick the lock of the closet door, then goes to her chemical laboratory to plot a sweet revenge. Flavia, who lives in a deteriorating but large English manor house, Buckshaw, with her father and sisters (their mother died in a climbing accident in the Himalayas), is mad about chemistry and one of her immediate ancestors left her a beautifully appointed laboratory in the east wing of the house.

Flavia, as mentioned, has a knack for discovering dead bodies in and around the village of Bishop’s Lacey as well as Buckshaw. The Flavia de Luce novels are mysteries set mainly in England with an 11-year-old sleuth, but I would hesitate to label them YA (Young Adult) fiction. They appeal more to adults.

The order in which to read the Flavia novels, if you want to read them in the order they were written, is as follows:

The latest in the series, Chimney Sweepers, was just released and here at the Wilburn household we devoured the novel in two or three sittings. In this one, she attends Miss Bodycote’s Female Academy in Toronto, as part of a special preparation that Flavia herself isn’t entirely sure about.

Rumour has it that a TV series of Flavia is in the works. Honestly, I don’t know whether to cheer or drown my sorrow in a Guinness. I have such a well-formed mental picture of Flavia and Buckshaw, I’m reluctant to be subjected to the whims of a director. Fingers crossed that it’ll be at least palatable, and, maybe, somewhat as good as the novels.

Oh, and “Yaroo!” is what Flavia often cries when she’s excited and riding her bike, Gladys, into Bishop’s Lacy to help the local constabulary who are not particularly eager to hear her insights.

Happy New Year to all!

My blog, Silver Bullets, has a new home at genewilburn.com

All the old posts, comments, and user logins can be found there.

I moved my blog, Silver Bullets, to my main website to help consolidate my sites.

The consolidation was inspired by my changes to Northern Journey Online, and my increasing comfortableness with creating WordPress web sites.

My main New Year’s resolution is to write posts more frequently than I did in 2014.

If you’re one of my previous readers, welcome back! If you’re new to my site, welcome, and I hope you enjoy some of my posts.